JESTER IN THE OUTFIELD: The funniest Dodger ever, Jay Johnstone, cracks wise with the Koz 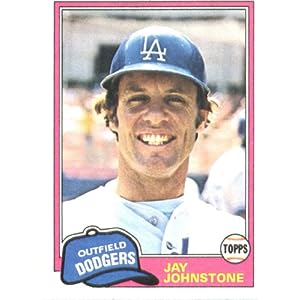 During a 20-year career in Major League Baseball, Jay Johnstone was widely respected by fans and fellow players alike for his solid hitting and defense.

But Johnstone was especially beloved for some of the wacky pranks he played on and off the field, such as pretending to be a groundskeeper so he could till the diamond in the middle of a game or setting a teammate’s cleats on fire. One prank involved his impersonating former Dodger Manager Tommy Lasorda. Johnstone put on Lasorda’s uniform and padded it out before running out to the pitcher’s mound with a can of Slim-Fast, the diet-drink the portly Dodger skipper did TV commercials for in those days.

All of Johnstone’s shenanigans eventually paid off in a big way — the veteran outfielder, a resident of Pasadena, penned three New York Times bestselling books about his exploits. His debut work, “Temporary Insanity,” knocked a Howard Cosell memoir off the top of the chart, angering Cosell but firmly establishing a second career for Johnstone. After he left baseball, Johnstone released two more books, “Over the Top” and “All of My Best Friends Are Crazy,” both co-written with former Los Angeles sportswriter Rick Talley.

At 7 p.m. Thursday, Aug. 18, Johnstone will appear at the South Pasadena Public Library to read from and sign a new edition of “Temporary Insanity,” which he has re-released at his own expense.

“That was the book I knocked Howard Cosell off the top of The New York Times chart with back in 1985, and he wasn’t happy about it,” Johnstone recalls with a chuckle, speaking by phone recently while en route to a special appearance at Dodger Stadium. “I was a straight-arrow kid when I was growing up in West Covina, so I think a lot of the funny stuff I pulled has to come from having Jimmy Piersall as my first roommate with the Dodgers. He went nuts twice, so he was a little off, but he taught me about life in general, and I’m glad I roomed with him.”

Indeed, Johnstone loved to be outrageous, performing stunts that included leaping on top of the Dodger dugout just before a game and running in full uniform through the stands to get a hot dog as the crowd cheered him on. His books were collections of his wackiest stories, similar to those recounted by other famous team clowns, such as relief pitcher Bill “Spaceman” Lee. Nonetheless, Johnstone maintained high standards for the kinds of tales he revealed.

“I had the publishing companies come to me and ask me several times to really fire away,” says Johnstone. “One wanted a tell-all like [former Yankee Jim Bouton’s] ‘Ball Four,’ and I said absolutely not. I had so much fun being a prankster, and they wanted me to write about that stuff. I’m not a tell-all person, putting people down.

“So they finally said tell those and the stories of your friends, and that’s how it came about. Little kids can read them. All three are in the Library of Congress. My mother was really happy about that. There’s only one piece of heavy language in them, and [former Cub] Lee Elia said it, not me. I tell people it’s a great bathroom reading book.”

Johnstone’s run of books came to an end in the ‘90s, partly because his co-author had an aneurysm that ended his writing career and because Johnstone had felt Talley, who later died in 1995, was the only writer who could truly capture his voice. He recalls telling Talley he never wanted to have his stories embellished because they were already wildly entertaining, and he never wanted to deal with ballplayers angry at what he wrote.

Today, at age 65, Johnstone makes special appearances for both the Dodgers and the Los Angeles Angels in addition to running Sporthings & More, a Burbank company that helps more than 350 nonprofit groups raise funds through appearances and speeches by sports stars or silent auctions of sports memorabilia.

But most of all, he loves getting in front of crowds at Rotary Clubs and high school career days nationwide and delivering motivational, yet funny speeches that spread joy, especially in these troubled times.

“I like making people laugh and having fun,” says Johnstone. “I still tell some of the jokes, because a lot of people haven’t heard them. But it was all in good fun, and there were no drugs or scandals with women.”
Posted by America's Funniest Reporter at 11:56 AM